Seniors love to listen to music.

And it’s no surprise why! Music reminds seniors of their past and can help relive their youth. Music can even help elderly seniors remember past memories with more clarity and better recollection.

Seniors are often especially fond of records, as that was what they used to play music growing up. They may still even have a massive record collection stored away in a basement. Seniors can enjoy their favorite tunes from the past with a sturdy record player, but there are so many options to choose from!

Fear not – we’ve researched the top record players for senior citizens and are providing you with a list of what we think are some great choices below!

Why Are Record Players Beneficial for Seniors?

Record players are beneficial for seniors because they provide seniors with a simple, familiar way to listen to their favorite music. Record players work in the same manner as CDs only they play vinyl records.

Many seniors view record players as nostalgic items and used them primarily to listen to music in their youth. For those who have fond memories of listening to vinyl records when they were growing up, using these record players is a wonderful way to relive the past.

Plus, since seniors grew up using vinyl records, they’re often very familiar and comfortable with using a record player – more comfortable than they would be with using an iPhone or a Shopify account.

Just as some seniors prefer to use a landline home phone over a smartphone, many older adults simply feel more confident using the technology they’ve grown up with, rather than the latest tech.

Can Record Players Provide the Best Benefits to Seniors?

Music is very powerful for connecting with seniors. It can help slow mental and physical decline and keep seniors mentally engaged.

Music has even been shown to jog memories in dementia patients!

Record players provide a way for them to connect with other people. When they play their favorite vinyl records, it allows them to interact with others by sharing the music they enjoy listening to together.

Music has been shown to:

And in fact, music has even been shown to reduce rates of depression in seniors and support elderly empowerment!

Let’s jump into our list of the very best record players for seniors to enjoy their favorite tunes of the past decades! 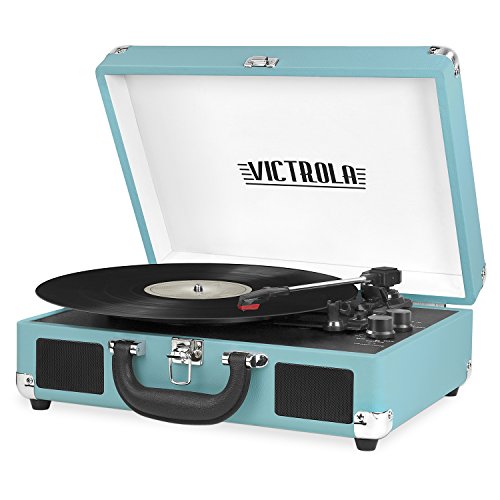 With 33 1/3, 45, 78 rpm speed belt driven turntable can play any speed of record a senior has laying around the basement. Housed in an easy-to-carry suitcase design, this record player provides portability with a glamorous vintage turquise color.

This record player boasts great sound quality with its built-in speakers, and even has sound isolating feet to prevent extra vibration (resulting in a clearer sound). Or, alternatively, it also features stereo RCA output jacks to connect external speaker equipment.

Want to listen to CDs too? No problem – this record player includes a line input for CD players, as well as a Bluetooth connection to play music from your smartphone.

For seniors who need to listen to their music in private, this record players also has headphone jack connection. The unit includes an input select knob, power/volume knob, and an auto-stop switch that stops the record once it is finished playing. 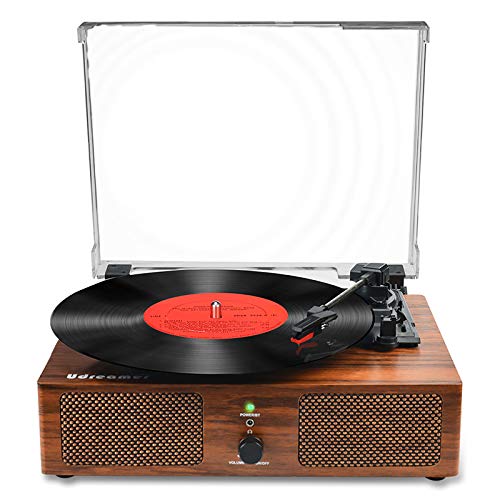 This Victrola Vintage 3-Speed Bluetooth Record Player is another great pick for any senior with an old school wooden design that should be familiar to older music fans.

This record player has handy built-in speakers as well as an RCA output, a headphone jack, and Bluetooth wireless connectivity for syncing up with an external speaker. It even has a USB connector to play digital music from a memory stick or computer!

Fans love the simplicity of this record player. It has just one large volume and power dial, with smaller turntable speed adjustment dials that can easily be ignored by the senior. 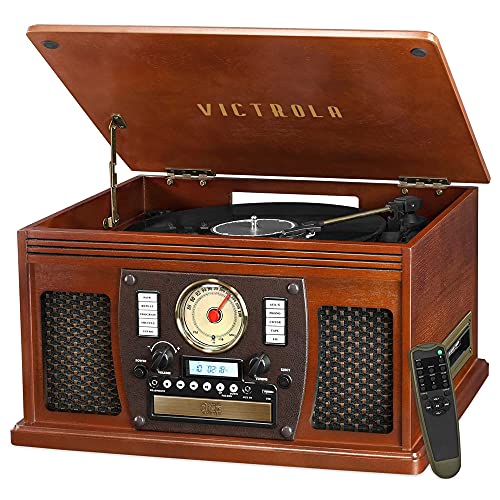 This record player can play CDs, cassettes, and the radio too!

The Victrola 8-in-1 Bluetooth Record Player & Multimedia Center is perfect for any senior that loves to entertain and want a record player that can do it all!

This record player doesn’t just play vinyl records – it also has a CD & cassette player, includes FM radio, Bluetooth, as well as a headphone jack and auxiliary inputs to stream audio from your smartphone.

Due to the amount of added features, this control display on this turntable is a bit more complicated than others, but it relies on handy knobs and tactile buttons to stay senior-friendly. This player includes a volume knob, and FM tuner, and tactil click buttons to select the input and turn the power on and off. It also has numerous handy functions like eject, repeat, shuffle, program, and has buttons for play, pause, forward, and rewind.

It even comes with a remote control, which makes accessible all the record player’s functions and settings that much easier. 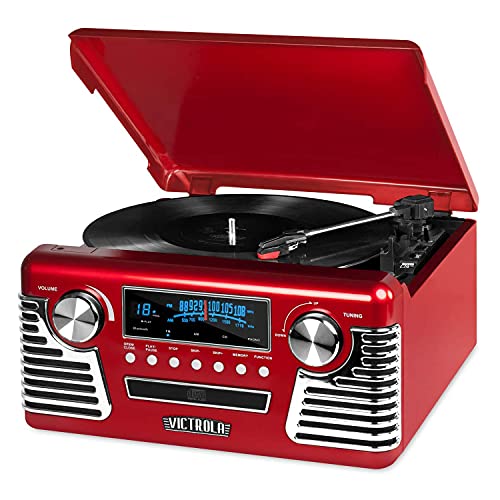 Designed with the vintage record player lover in mind, this Victrola 50’s Retro Bluetooth Record Player is perfect for seniors who adore the 50s!

In addition to the CD and radio functionality, it also includes Bluetooth, aux outputs & a headphone jack, plus the built-in stereo speakers of course!

This turntable even can record your vinyls to MP3s (the necessary Mac/PC software & required USB cable is included).

When it comes to controls, this player features a volume and FM tuner knob, an input select (aka function) button, as well as an entire set of buttons for the CD player. The buttons are raised an tactile, making them much easier on seniors than flat touch buttons. The record player also has a display screen with LED light that’s bright enough for seniors to read clearly. 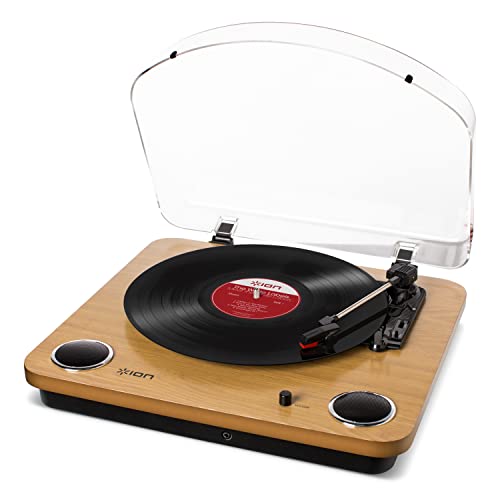 The ION Audio Max LP – Vinyl Record Player is another fantastic choice for seniors who have been obsessively collecting records since the good ol’ days!

The player’s exterior features a luxurious finish of natural wood which looks as if it’s straight out of an antique shop.

The device also includes a built-in stereo system which not only sounds amazing on its own, but can also be connected to external speakers via the auxiliary input and RCA output.

This record player can also convert tracks into digital files via its USB connection, with included software.

The ION player also comes with a protective dust cover, a 45 adapter, and a felt slip mat to muffle any vibrations.

If you were looking for the centerpiece of your home vinyl experience then look no further than this modernized turntable system from ION Audio!

How to Choose the Right Record Player for an Elderly Senior

There are many things to consider when choosing the right record player for your senior loved one. The most important aspect, naturally, is sound quality.

If the device doesn’t produce a clear, crisp sound then it’s not going to be beneficial for an elderly senior – especially if they already struggle with hearing!

But there’s a lot more to factor in besides just sound quality. We’ll delve into the major features to consider below.

Features to Consider in a Record Player for Seniors

What turntable speeds the record player allows for is another important consideration.

Vinyl records are pressed in one of 3 speeds:

Check the record cover or label to see what speed a specific individual album should be played at. If the senior has existing albums they want to play, check and make sure you are choosing a turntable that can play your elderly relative’s favorite jams!

Some record players actually have the built-in capabilities to convert vinyl record tracks to digital files! This can be handy for seniors who want to listen to their favorite tunes on digital devices like a smartphone or computer, instead of only relying on the physical record.

This allows seniors to play music from physical records on modern digital devices by converting the tracks to files. There are actually both USB and AUX record players out there that do this for you! Pretty cool, huh?

If you’re looking for additional features on top of great sound, built-in radio tuners are a wonderful addition to any classic record player.

This is especially helpful if your senior loved one enjoys listening to the radio or wants easy access to their favorite local stations. A record player with a built-in radio tuner may eliminate the need to purchase a separate stand-alone radio player, resulting in fewer devices a senior needs to worry about.

Connecting to Outside Speakers or Headset

Many record players come with inputs that allow users to connect them to external speakers or headsets. Not every record player has this feature, and some simply rely on built-in speakers to play the music.

If seniors will be playing their vinyl records in the privacy of their own homes, they can skip out on needing inputs for connecting to outside speakers or headsets.

However, if the record player will be used with other people around, it’s best to purchase one that allows for connecting to external devices, allowing a senior to listen on their own private headset.

If your senior has a collection of existing digital media files, they might enjoy being able to play MP3 files from an auxiliary source through the record player.

Many record players today provide this ability with connections for you to plug in your smartphone or computer and play MP3s through the speakers – just like you would with a modern day sound system!

Similarly, consider if the senior will benefit from having a turntable with a built-in CD player too. If the senior has a mix of record albums and CDs, an all-in-one multimedia record player may be the best option.

Bigger buttons with contrastingly bold text can help seniors with vision difficulties use their record player more easily. If a senior struggles to turn on the device and choose settings accordingly, they might simply give up and never even use it to play their records!

Opt for a clear, simple, display that is easy to understand and use by those with vision impairments.

There are many different styles of record players! Classic, vintage models have a style all their own, and it can be fun to look for designs your senior will enjoy.

Many seniors will likely appreciate being able to show off their old school records and the technology that helped bring them back.

The more technologically advanced a record player is, the trickier it might be to use for seniors.

Many seniors just want a simple record player to play albums, not convert their old tracks or sync up with Spotify, so keep in mind what your senior loved one wants out of their new device before you go too crazy with all the bells and whistles.

Some seniors may benefit from additional features. But for others, it will just complicate things! Try to assess what features the senior will enjoy the most when planning a purchase.

Make sure knobs will be easy to turn for those with arthritis – or opt for designs that also offer the ability to fast forward, rewind, and increase volume through the use of simple, tactile button controls.

Seniors who want to make use of their vinyl record collection can find a record player that suits their needs by considering features such as speed RPMs, built-in stereo system, and wireless connectivity.

Music is always a gift to share, and these senior-friendly record players are just the thing to light up any older person’s home with joyful tunes! 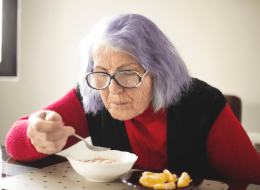 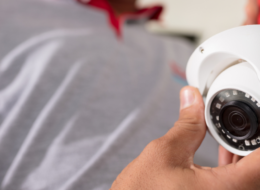